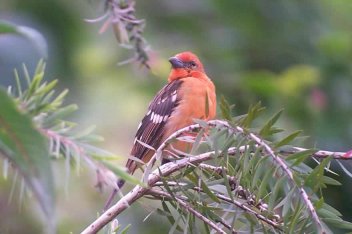 Costa Rica has long been famous among serious bird watchers, but many people who would never consider the activity at home quickly become interested in the country’s spectacular avian diversity. With almost 850 species of birds — more than in all of North America — packed into an area half the size of Kentucky, it’s hard not to become enthused about the variety of feathered creatures one encounters in Costa Rica. And the country’s travel agencies can provide experienced nature guides who make any bird watching expedition an educational experience.

One of the reasons for Costa Rica’s extraordinary bird life is the country’s great variety of habitats: rain forests, mangrove swamps, beaches, cloud forest, rivers, etc. And any two of those ecosystems, with their resident bird species, are often only a short distance apart. Birders from North America who visit Costa Rica during the northern winter invariably recognize familiar faces in the forest, since many species of warblers, flycatchers, vireos, orioles, etc. migrate to Costa Rica every winter.

The country’s exemplary system of national parks and protected areas provide more than ample stomping grounds for birders, but just about anywhere you look in Costa Rica, you spot interesting avian species. Even some of the hotels in the San Jose area have such colorful critters as blue-grey tanagers, great kiskadees and crimson-fronted parakeets in their gardens. However, those interested in bird watching will want to see the resplendent quetzal, which lives in the cloud forests of Monteverde, los Santos region and the Central Volcanic Mountain Range, and the equally spectacular scarlet macaw, which can bee seen on the Osa Peninsula or the area around Carara National Park.