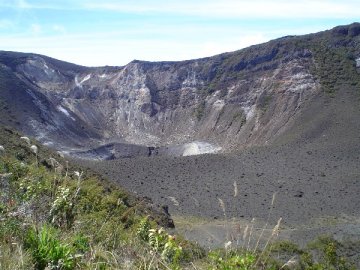 The Turrialba Volcano is the last of the Central Volcanic Mountain range in the northeast direction; and like it is in the same mountain base that the Irazú, it can be said that these two volcanos are «almost identical twins», although the Turrialba has been inactive many more years than the other one, the Irazú, more familiar to ticos and foreigners, since you can arrive to the own crater in automobile. To go up to the old «Torre alba», as the Spaniards called it, it is necessary to walk during for a while.

It is a stratovolcano composed. The history of this volcano activity occurs in 1847, 1853, 1855, 1861, 1864, 1865 and 1866 the last. In the period 1864-1866 the ashes fell in the western part of the Central Valley. Currently maintains fumarolic activity with a temperature of 90 degrees Celsius. It has an area of ??2 km radius around the crater. Located in the shepherdess, Santa Cruz de Turrialba, Cartago. It has a maximum elevation of 3,340 meters above sea level.

Geomorphology of the summit: it has a length of approximately 2000 m from east to west and 1200 m north-south. Is composed of three craters, each with small vents, known as primary, center and east.
Petrography: basaltic lavas and andesitic scoria.