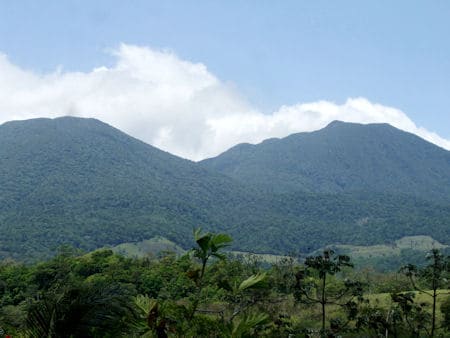 The Tenorio is located in the province of Guanacaste at 1.916 m.s.n.m., divided by a picturesque valley, well-known as Bijagua. From this town the climbing can be attempted, although there are not traced routes. It is the volcano more to the east of the Mountain range of Guanacaste.

It consists of four volcanic picks and two twin craters (one sometimes called volcano of Montezuma). It is covered for savanna in the low parts, rainy forest in the middle and cloudy forest in the upper. From the the west slope flows the Tenorio river and from the south the Tenorito and the Martirio. From their top one can observe the plains of Guatuso and San Carlos, the Lake of Nicaragua, the Caño Negro Reserve Pipe and the Lake Arenal. From their slopes it winds the Frío River. A legend exists on an eruption in 1816, but the volcano was observed with dense forest in 1864 and it is not considered that has had an eruption in historical time. From 1989 it has been in prefactibilidad study to determine their geothermal potential. In 1998, the proximities of the volcano suffered a tremor of regular intensity.

From 1995 the volcano is part of the Tenorio National Park. It is known by their thermal waters (with temperatures of up to 94°C) and bubbling pailas. In the sourroundings of the Tenorio base extends big macadamia plantations.