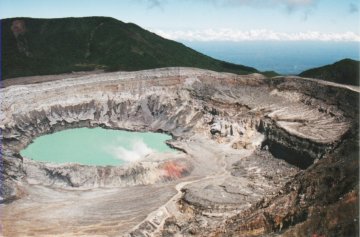 Among those already extinct volcanos «El Viejo» toward the west and the Barva going west, and as culminating point there is one of the most imposing peaks in the Central Mountain Range, the volcan Poás with 2.708 mts. of height. Their main crater, a magnificent pot that stays active in permanently, attracts thousands of visitors, which can arrive in their automobiles up to the border of the enormous boiling paila, one of the biggest of the world as many experts affirm.

The highway allows to come closer comfortably almost until the border of the active crater.