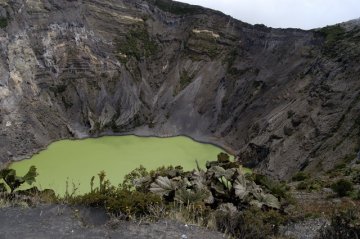 Their craters are located to a height of 3.432 mt, the Irazú forms, along with the Poás, the most “visited volcanic pair” of the country; and its reputation, accentuated by the active period, that beguns in 1963, is a magnet so ticos and foreigns arrived with avidity at his top. However, the Irazú nowadays sleeps, after the countless problems that caused, in more than half of Costa Rica, during several years. Because the Costa Ricans remember the name Irazú very especially so much for the ashes that whipped, to the field, -with the ruin of many cultivations- as the cities, especially San José.

Their slopes are relatively soft toward the south and west but strong toward the north. The mountain mass group is lingering at E. N. E. approximately. In the volcano slopes there are numerous dairy properties and it is also cultivated eagerly, especially potato.