Monteverde is Costa Rica’s green jewel, an environmental amusement park where nature rules and conservation is part of everyday life. Eco-tourism was born in the cloud forest of Monteverde, as well as innovative ways to experience it, such as canopy tours through the trees and hanging bridges connecting mountains. This surreal world is filled with animals and plants in numbers too large to count. 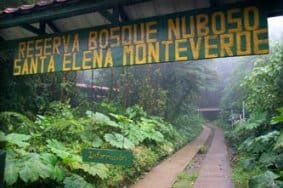 Mist covers the town and the forest. Tiny droplets of water merge with the sun’s rays to form magnificent rainbows set in the backdrop of the sky. The Monteverde Cloud Forest Reserve is one of the best natural reserves in the world, with thousands of species of mammals, birds, amphibians, reptiles, insects and plants.

Monteverde is one of Costa Rica’s biggest tourist attractions, and there is plenty to be seen, both in the reserve and in the quiet nearby town of Santa Elena .

The locals will tell you Monteverde is the only place in the country with three clearly defined seasons: wet, dry and misty. The latter is caused by wind-driven clouds from the Atlantic that bathe the forest November through February and blow mist across the ridge. Daytime temperatures remain pleasant but may get a little colder depending on cloud cover and wind conditions.

Monteverde means green mountain in Spanish and the name couldn’t be more appropriate.

The community was founded in 1951 by 44 Alabama Quakers who fled the draft and settled in peaceful Costa Rica. After exploring different regions they immediately fell in love with Monteverde and purchased 3,000 acres (1,200 ha) of land overlooking the Gulf of Nicoya. 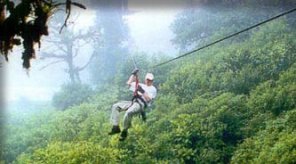 Economic prosperity followed when they started a cheese-making industry with the 50 Jersey cattle they had brought from the United States. Some of the country’s best dairy products are still manufactured at the visitor-friendly plant and are exported to international markets.
Right from the start, the Quaker settlers enforced conservation policies responsible for Monteverde’s world-renown environmental treasures.

Acclaimed as one of the most outstanding wildlife refuges in the world, the Monteverde Cloud Forest protects eight different life zones encompassed in 25,730 acres (10,400 ha) stretching from the Caribbean to the Pacific slopes. The private reserve is operated by the Tropical Science Center of Costa Rica and is a cloud forest rather than a rainforest because the mist actually goes through the woods due to the high altitude.

A single tree in Monteverde is a habitat of its own. Hundred-foot giants (30m – 40m) rise proud above the clouds providing a home to millions of birds, insects, jaguars, tapirs, toucans, howler monkeys, coatis, tarantulas and an endless list of animals and plants. More than 450 different species of orchids adorn the vegetation, along with 400 other species of epiphytes (parasite plants), mosses, bromeliads and ferns. Thousands of insects also live in the foliage contributing to the richness of the ecosystem.

Hanging bridges let you explore the treetops and are pefect for shy adventurers. 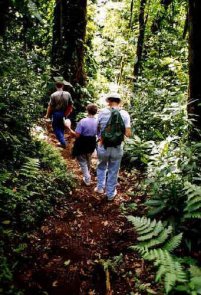 Trees shortened by high elevation and the exposure to constant winds may only grow to 30 feet (10 m). This elfin forest is the empire of the mythical golden tote, an endemic species discovered in Monteverde 40 years ago. In spite of the conservation efforts, the inch-long (2.5 cm) amphibious was last spotted in 1988 and is now believed extinct.

More than 100 species of mammals, including 5 types of felines, 400 different birds, 5,000 species of moths and tens of thousands of insect and plant varieties make Monteverde an eco-tourism Mecca.

Be sure to bring your binoculars because birding is superb in Monteverde. The forest is filled with seeds and fruit that feed thousands of emerald toucanets, collared redstarts, blue-crowned motmots and black guans just to name a few.

However, many visitors come searching for one thing only: the majestic quetzal. The luxurious bird is known for its emerald and ruby colored plumage and adult males also boast a long tail used for macho mating displays. Nesting season runs March through April and more than 100 breeding pairs guarantee the survival of the endangered species. The quetzal is a permanent resident of the cloud forest and can easily be seen December through August.

Admiring nature in Monteverde is easy thanks to a diverse and well-maintained trail system that leads into the heart of the reserve. Hearty hikers can also venture down rugged trails through the Caribbean slope and into true wilderness.

Extinct or hidden in Monteverde’s rainforest, the fate of the rare golden toad is uncertain.

Conservation efforts in the region wouldn’t be as successful if it wasn’t for the community’s involvement. The Santa Elena Rainforest Reserve is a case in point. The private non-profit refuge is operated by the Santa Elena Agricultural High School and is dedicated to environmental education, conservation and eco-tourism. 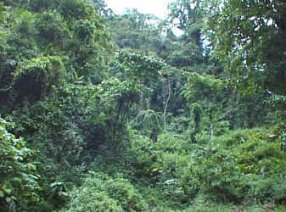 Created in the 1990s, the reserve protects 1,440 acres (580 ha) and is located on the same mountain chain as the Monteverde Cloud Forest. Although they share most of the wildlife, habitats and peculiar characteristics, Santa Elena Rainforest is unique in many ways.

When it comes to exploring the reserve, you have a lot more options in Santa Elena. You can stick to the conventional trails that will take you through 7 miles (12 km) of natural paradise or gain a new perspective from above the tree tops.

Adventurers may enjoy the Original Canopy Tour that lets you fly through the forest on 7 zip lines, climb 50 ft. (15 m) inside a strangler fig tree and rappel down 100 ft (30 m) off the highest platforms. If you would rather take one step at a time, the Sky-Walk raises you above the forest on suspended bridges. The half-mile (0.8 km) stroll runs between mountains saving you a lot of hiking time and kicking your experience up a notch.

The reserve’s higher altitude (5,600 feet –1,700 meters– above) renders an impressive view of Arenal volcano and lake. Because it’s smaller than the Monteverde reserve, Santa Elena is less crowded. 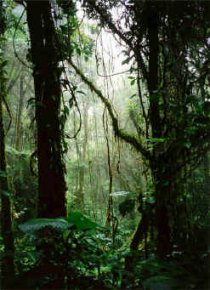 The Children’s Eternal Rainforest was founded by school kids from around the world and the Monteverde Conservation League. The 50,000 acre (20,200 ha) reserve encompasses a transitional habitat between wet and moist pre-montane forests. One of the main attractions is the Sendero Bajo del Tigre (Jaguar Canyon trail), located on the Pacific slope. Its elevation and humidity create a unique environment where thirty species of trees have been identified as new to science.

Thousands of species of flowering plant fill the cloud forest with specks of red.

Due to the success of the forest sanctuaries in Monteverde, several private reserves and natural attractions have taken advantage of the area’s rich biodiversity and opened their doors to eco-tourism. Take your pick among the Finca Ecológica Wildlife Refuge, San Luis Waterfalls, Orchids of Monteverde, Butterfly Garden, Paradise for Bellbirds, and Reserva Sendero Tranquilo. Each one of them features unique characteristics that make them stand out on their own.

There are so many species of hummingbirds in Monteverde that they’ve earned their own show and gallery. So far scientists have counted 30 varieties of these hyperactive little birds flying about the cloud reserve.

The show is displayed at the Hummingbird Gallery, it’s free and simply unbelievable. Stick around for ten minutes and you are guaranteed to come in close contact with at least six species as they flutter between the feeders. Chances are you’ll be absorbed by the violet saber-winged, fiery-throated birdies and stick around a lot longer.